The Blue Exorcist anime has been released in various formats for home release, primarily in Japan, North America, and Europe. Here is the list of official releases from each region.

The Blu-ray and DVD home releases for the anime in Japan were released from 2011 through to 2012. There were a total of 10 unique releases, each providing 2-3 episodes at a time, as well as several media bonuses such as audio commentary by the Japanese cast, non-credit theme song videos, and extra side-story clips.

Here are the releases in Japan organized chronologically by release date:

Here are some pictures of the extras that come with each volume release: 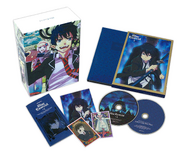 Volume 6 Limited Edition contents, including the 3-sided box illustrated by author Kazue Katō
Add a photo to this gallery 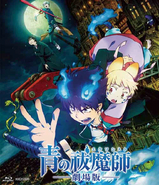 The Blu-ray and DVD home releases for the Kyoto Fujō-Ō-hen in Japan were released early to mid 2017, towards the end of the season's initial airing on Japanese television. There were a total of 6 unique releases.

Here are the releases in Japan organized chronologically by release date:

Here are some pictures of the extras that come with each volume release: 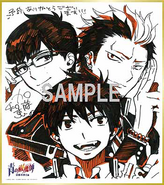 Volume 2 Limited Edition Bonus Box to hold all volumes, with art by Kazue Katō
Add a photo to this gallery

The First Season was initially released as 4 unique DVD products late 2011 through to mid 2012 containing only English subtitles as the sole localized option. Fully-localized Blu-ray and DVD home releases for the First Season in North America were released throughout the second half of 2013, containing both Japanese audio (with English subtitles) and newly-dubbed English audio. The North American releases have been handled by Aniplex of America Inc.

Here are the releases in North America organized chronologically by release date: 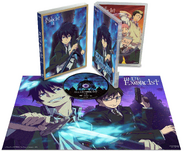 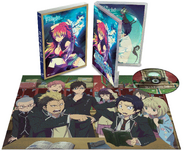 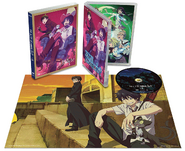 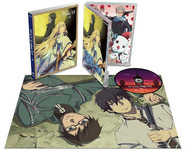 DVD Vol. 4
Add a photo to this gallery

At a press release on June 2, 2017 during the Anime Expo, Aniplex of America Inc. announced that it would release the Second Season: Kyoto Saga on Blu-ray and DVD. The distribution of the releases were exclusive to Right Stuf Anime and preorders began on July 5.

The First Season was initially released in two parts from mid to late 2012 by Madman Entertainment. Like the original North American releases these releases only contained English subtitles as the English dub had not yet aired. Starting in late 2013 and ending in 2014 six bilingual volumes were released containing both English and Japanese audio in both DVD and Blu-ray form. Volume 1 has also been released with a box cover featuring the art from the boxes from Japanese Volume 1 Limited Edition and the North American Blu-ray Box Set 1, but did not feature any of the collectibles. The complete series was made available on both DVD and Blu-ray in early 2016.

Here are the releases in Australia organized chronologically by release date:

Retrieved from "https://aonoexorcist.fandom.com/wiki/Home_Video_Releases?oldid=50900"
Community content is available under CC-BY-SA unless otherwise noted.