This Is the Real Me (これが本当のあたし Kore ga Hontō no Atashi) is 53rd chapter of Kazue Katō's Ao no Exorcist.

Continuing with the recollection, Mike tells the group that Tamamo was captured by the Illuminati, and that she was subjected to a fate worse than death. Rin, after hearing what Mike had to say, concludes that they just need to barge into the Illuminati's base and save Izumo. As they leave, Mike recalls what happened after Izumo was brought to the base: her sister was smuggled out of the base and was adopted, Maria Yoshida was murdered for her treasonous act, and Izumo was blackmailed into being the replacement for her mother when she eventually has no use, causing her to lose faith in humanity. Back in the present, Izumo prepares for her physical examination with a look of anguish etched upon her face.

Characters in Order of Appearance

Demons in Order of Appearance 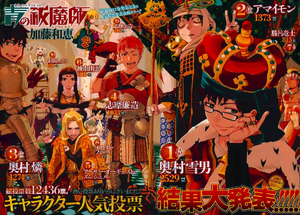